Author's note: This begins an occasional musing about a photo -- not necessarily a great photo, but one with a story behind it. Welcome to Random Ramblings.

A shot that I have always wanted to get was a night photo at the massive coaling tower that straddles the former Erie Railroad main line at Susquehanna, Penn. In recent times, a night photo is just about the only option available -- even though the line is now owned by Norfolk Southern, the only reliable traffic is a tri-weekly freight operated by the New York, Susquehanna & Western between Little Ferry, N.J., and Binghamton, N.Y. The train leaves Binghamton at about 7:30 p.m. on Sunday, Tuesday and Thursday, passing beneath the coaling tower sometime around 10:00 p.m. The counterpart train leaves Little Ferry at about 5:00 p.m. on Monday, Wednesday and Friday, getting beneath the coaling tower well past midnight.

Since I was heading up to the Adirondack Scenic Railroad in Old Forge, N.Y., for an event, I decided to do some night photography on the way, pausing at Susquehanna and also along the former Delaware & Hudson at Harpursville, N.Y., on the night of August 30, 2012. It had been a few years since I had been to Susquehanna, but I found the dirt road back to the coaling tower in the last light of the day, and by 8:00 I was set up waiting for the train.

At this point I only knew the departure time for the train -- 7:30 from Binghamton -- and since I wasn't that far out of Bingo I was ready for the train to get to me almost anytime after 8:00. But 8:00 came and went, then 8:30, then 9:00. I broke out my iPhone and started looking through old messages on the NYS&W Yahoo! group to try to see if there was any info on when the freight ran. Past messages said the train went through Callicoon, a bit farther to the east, usually around 10:15, but at 10:00 I was getting antsy. Maybe the train wasn't running tonight...

I composed a message to post to the group to see if anyone had any info on the train's departure, but just as I was ready to hit "send" I heard horns at 10:35. I got the strobes ready and lined up the shot. The train's lights came out from under the coaling tower, temporarily disorienting me (I lost the right edge of my frame) so I pushed the trigger. Poof! Everything lit up for one 400th of a second and it was done.

This shot has a few problems. First, the focus is soft. That needs to be corrected. Second, this is a cropped version of the photo -- I pushed the trigger too early when I panicked. Next time I'm going to put the camera on a tripod and watch the train directly (not through the viewfinder). Also, this was the first time I was using my new/used Nikon D7000, and this kind of shot is not the time to be experimenting with unfamiliar equipment. 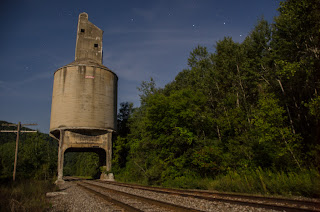 Since there was a full moon, I spend some time getting some exposures of the coaling tower illuminated only by moonlight. Once again, the focus is soft.

A photographer friend, Pete Lerro, has given me hints for better night focusing, and I'm eager to get back and try these shots again. All it takes is giving up some sleep.

It's not just me, it's not just any one of us - it's all of us, been there, done that, still doing that, lol. At least, those of us with a camera in hand and a passion for photography. 8 PM, 9 PM, 9:30 PM,, 9:45 PM - getting antsy (though kudos for staying a few minutes longer and getting the prize!). And that prize - see above - been there, done that and will likely do it again! Sorry to hear your list, like mine involves a looping feature. Got my shot at the W&W with #98 on a trestle at night. Fired early and found the focus was off (yet, I've done this before with great results at New Hope!). I'll be back. Incidentally, was Pete's "tip" a $2.00 laser pointer from Amazon.com (works great), or did he suggest the same laser pointer, but in a box, lol - for $35.00? Nice to have a spot to focus on. Another tip - a small bulb /LED or flashlight by the gauge - when the engine obscures the light, press the shutter! /Mitch

It was the cheap laser pointer from Amazon. Found one that was already in New Jersey (i.e. didn't need to wait four weeks for it to come from Hong Kong) for only $5.00. Ready for next time!

Pete said do you really want to trust your photography to a $2.00 laser pointer? So, I bought two, lol. I can leave a small green (and now blue) spot on the Moon!